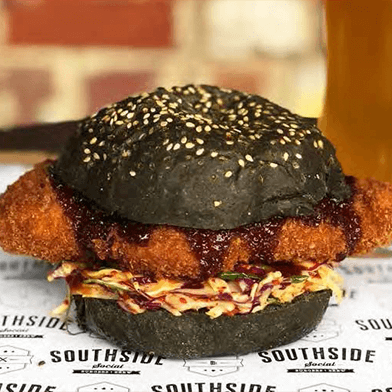 Butterfly the chicken breast into two pieces (four in total).  In a small deep baking tray place the chicken and pour enough Blue Moon beer to just cover the top of the chicken.  Add the orange zest and juice, ginger, garlic, star anise, cloves, cinnamon, coriander and cumin seeds, and pepper.  Place a sheet of baking paper over the top then cover with baking foil. Place in the oven at 180oC for 1 hour

Check the chicken by making a small cut on the thickest part. Clear juices should run from the chicken.

Allow the chicken to cool while in the liquid (no longer than 30 mins). It can be stored for up to 3 days.

Crumb the chicken by lightly coating it in rice flour then dipping it in the egg wash then coating in Panko crumb. Fry the crumbed chicken in vegetable oil until golden.

Just before serving mix all ingredients together. Season as needed.

Mix the Shichimi with the Kewpie and season with salt and pepper.

On a lightly toasted charcoal bun top with the slaw and chicken. Serve with an ice cold Blue Moon Belgian White!